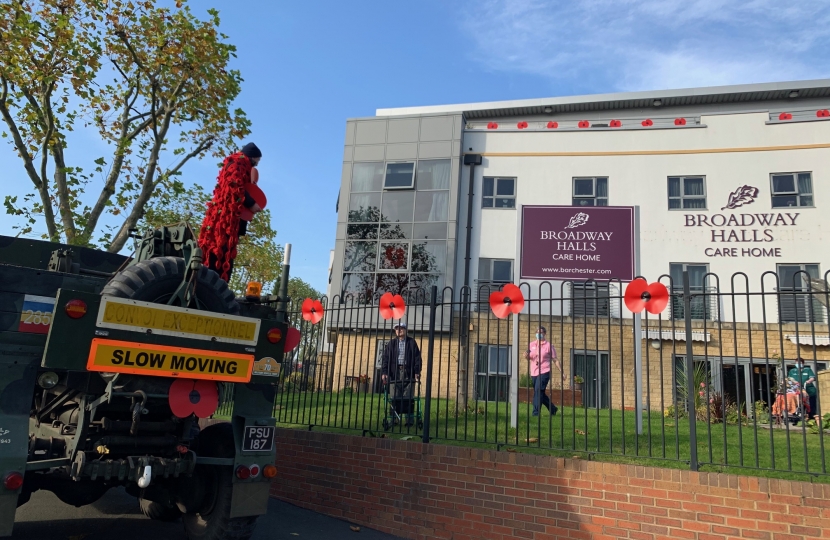 The MP for Dudley North, Marco Longhi praised the wonderful care provided during the pandemic by care workers and staff at Russells Hall Hospital to the Prime Minster yesterday.

In particular, he mentioned staff at the Barchester Broadway Hall Care home, in Dudley, who went out of their way to enable residents to participate in Armistice Day commemorations.

Marco Longhi MP worked with residents to raise over £1,000 for the Royal British Legion. Marco installed hundreds of lamppost poppies across the borough. The Barchester Broadway Hall Care home, in Dudley got involved in Marco’s Armistice Day commemorations. When he visited the care home on a 10.5 Ton Military vehicle, he met Stan Plawecki (aged 94) and Myra Staves (agreed 87) – socially distanced.

Marco Longhi MP said “It was such an emotional event and a real honour to meet Stan and Myra.

“I have heard so many fantastic stories about the care provided by this and many other care homes. It has been a torrid time for so many, but it was a pleasure to see the delight of residents and staff when we visited them.

"It was an honour to mention them to the Prime Minster as well as the great care shown by the staff.

Marco Longhi MP visited Northway Medical Practice today to review how the vaccination programme is being rollout and to provide confidence to local residents and feedback to Ministers.